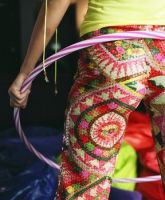 The sixties were a time of social and musical revolution. This influential decade gave us free love, the mini skirt, hula hoops, and some truly awful music videos.

We’ve gone deep into the vault to drag out these gems. While some may argue we should have left them there, I can’t help giggling at how cheesy these clips are.

“You Can Have Him” by The Cake


First up we’ve got The Cake: two groovy girls and one rather sullen one. While her band mates bob along to their hit single You Can Have Him, she awkwardly stands still. To be fair she does sing a bit, but surely she could get into this performance a little more!

“The Ballad of Bilbo Baggins” by Leonard Nimoy


Yes, that’s right, it’s that Leonard Nimoy. Star Trek’s not the only nerdy thing Leonard loved. Apparently he was also quite partial to The Lord of the Rings. The song’s just terrible, and the choreography in this film clip isn’t much better. Yet I couldn’t seem to look away.

“Where Did All the Good Times Go?” by Dick and Dee Dee

This is one weird clip from sixties duo Dick and Dee. Firstly we’ve got Dick aiming a rifle at a high-kicking go-go girl. Then there’s Dee Dee looking miserable as she rides a mechanical horse. This singing pair might be glum, but the dancing girls seem to have a great time.

“Queen of the House” by Jody Miller


Ahhh, the sixties really were a different time, weren’t they? Nowadays this clip would be seen as sexist. Back then, well, it was just life as it should be.

I’m sure my husband would love me to wear these sexy outfits while I clean our apartment, but I’m glad times have changed! Queen of the house? More like slave of the house if you ask me!


Frank Sinatra Jr. never reached the dizzy heights of fame enjoyed by his father, and this clip goes some way towards explaining why! I wonder whether this video started those rumors about pool cleaners. These buxom beauties certainly seem happy to be around Frank!