It looks like Sony Pictures Entertainment is finally taking online video seriously. They’ve revamped their old Grouper site under a new name and are constantly on the lookout for the “hottest emerging talent on the web.”

By creating CRACKLE, Sony hopes to stray away from the copyright infringing past that Grouper was once associated with by placing a new agenda on original web series.

CRACKLE isn’t just another site to find original web series, it a place where original content creators can develop. If chosen by the CRACKLE team, creators are given funding and, in some cases, allowed to work with the higher-ups at CRACKLE Studios. 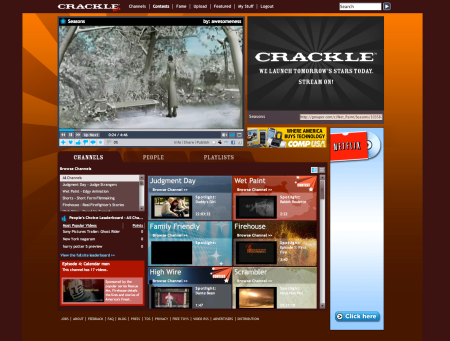 Aside from aggregating other web shows from every corner of the net (The Minisode Network etc.), CRACKLE has five of it’s very own original web series that are constantly updated:

What could be funnier than a gay web series? How about a gay web series that isn’t actually gay? Gaytown lead character Owen only pretends he’s gay so he doesn’t hurt his friend’s feelings. Talk about a classic web series concept!