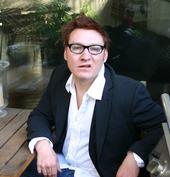 Dan Fielding is a domestic God, or rather he thinks he should be. This guy has been cropping up everywhere recently, and currently has a MySpace page and YouTube channel.

So who is he, and what does he do? Well, he describes himself as a 27 year old male from London who is the next Jamie Oliver, but with a hint of Nigella Lawson.

At the moment he is supposedly a staff writer for a highly successful TV programme and writes material for a very well known presenter. But he wants more, he wants to star in and produce his own show called Domestic God.


It’s clear that this video is quite professionally made, with the production values and sound quality high. I’m thinking this isn’t all as it seems, and just a guy who wants a television programme.

He currently has 9 clips of himself on YouTube, covering such topics as celebrity chefs and dating. There is also a contest happening on his MySpace page, where you have to work out who he truly is.

My money is on this being the start of a viral video advertising campaign by someone or other. But I could be wrong, and Dan Fielding could actually be a Domestic God. Move over Jamie Oliver.

More in Home and Garden