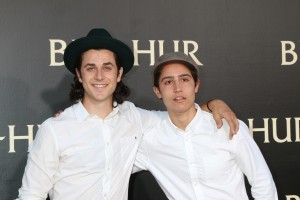 my best friend and soulmate,” Henrie told E!News in a statement.

The bride reportedly wore a gown by Enzoani, while Henrie wore a tux by Indochino. The two shared their first dance to Michael Bubles “Hold On.”

The couple had a full Latin mass, which lasted nearly two hours, guests said. Lavender was the color theme, with the bridesmaids wearing lavender dresses and the bride carrying a bouquet of lavender-colored roses.

Guests threw white rose petals at the couple as they emerged from the church.

Henrie’s former Wizards of Waverly Place co-star Selena Gomez was in attendance without her boyfriend The Weeknd. Gomez reportedly wore a wine-colored dress with her hair in a crown braid.

“Very much in my feelings about my big brother getting married. Even though we for sure knew it would be him first,” Gomez wrote on Instagram. “May God bless you and your beautiful wife Henrie!”

Henrie kept his engagement secret until January, four months after popping the question in a grand, romantic gesture.

After the two chartered a private helicopter off Southern California’s coast last October, they were surprised by her extended family, who traveled all the way from the east coast to witness David’s proposal.