Easy Bake Lovin’ is an online cooking show hosted by the lonely chef Piper. She describes herself as “just a single girl looking to get married to YOU and love YOU for the rest of your life.”

Other than her red hair, she’s just like Rachel Ray– if she was insane and/or on drugs. 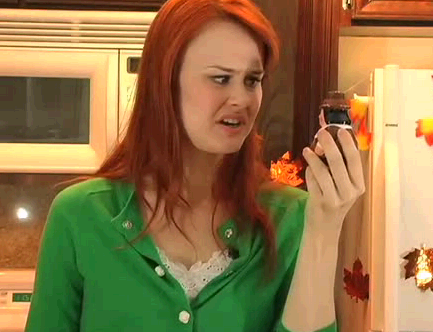 Every Tuesday, Piper tries her best so show us how to make a dish or at least give a few cooking tips. Unfortunately, her craziness often gets the best of her and the end result isn’t very satisfactory. Then again, this can only be expected of since she spends most of her time either talking to herself or inanimate objects.

You’d think that an entire show that revolves around the same kitchen would be boring, much less funny. But Piper’s odd humor is just erratic enough to keep the show exciting. When she’s not doing her ramblings of self-pity, she’s mocking all the usual phony mannerisms that can be seen on practically any show on The Food Network.


This is Piper’s special Thanksgiving episode where she reveals her cranberry sauce recipe. The holiday season, as she says, “Is a great time to feel sorry for yourself for all your failures!”