Are you enjoying just too much internet fame? Sick of making millions of dollars just by acting like a total jackass online? Well boy do I have the solution for you.

Its called the Onision strategy!And it’s easy as pie to do. Simply go on a few crazed twitter rants voicing some unpopular opinion. Pick any one it doesn’t matter what, you’ll want to offend as many people as possible. 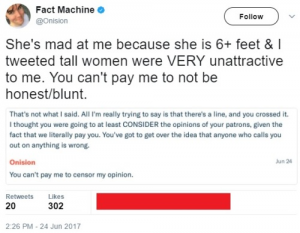 Next you’ll want to make a series of videos claiming to be on the receiving end of constant harassment. Enough for people to want to help you through it. Its best to avoid any specifics and whether or not you instigated it should be irrelevant. Delete any evidence that might place you at fault. Does anyone else’s side of the story even matter? 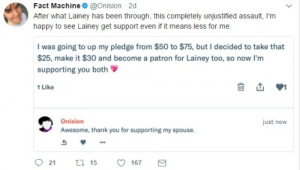 Finally be sure to have a nice long history of constantly lying to your fans, lying about your business partners and trash talking your spouse and her family when it’s convenient to your story.  Better yet make a few videos about it and be sure that it hits over a million views.

Not able to milk it for views and infamy as much as you wanted, no problem just be sure to reference some small piece of it throughout other videos. That will invoke enough curiosity from your audience that you’ll be able to milk cheating for on your wife for years to come.

What? You say your infamy isn’t as high as you would like it to be?

Just make it your personal goal to break every taboo known to man.

Openly embrace a polyamorous lifestyle, tell everyone how much you love threesomes, go ahead and discuss your sexual history in detail. It shouldn’t matter if your followers are only around 13, just call it educational or informative.

Keep at it long enough and soon you’ll lose every fan and every benefit of being famous. Heck you might even lose that house you’ve been renting for nearly 10 years! But that’s if you’re lucky.