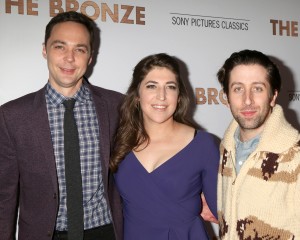 LOS ANGELES – MAR 7: Jim Parsons, Mayim Bialik, Simon Helberg at the The Bronze Premiere at the SilverScreen Theater at the Pacific Design Center on March 7, 2016 in Los Angeles, CA

Defying what physicists have claimed to be impossible, The Big Bang Theory star Jim Parsons revealed secretly that he has a ball of hot plasma in a plastic jar. Parsons is reported to have told several members of the show’s cast, which anonymously told network executives.

Details are sketchy regarding this ball of plasma. Inferences from several statements suggest it is about two-and-a-half by three inches, and is infinitely hot. Details also suggest the plasma has been in a state of equilibrium for about three months.

“It would require the gastroeconomic equivalent of the kinetic energy of a sub-micro-atomic quasar. The mathematical calculations would require more than any supercomputer could handle, except for my head,” Parsons said in an unrelated statement.

Some have demanded to see the ball of plasma, suggesting a subpoena be issued. Opponents (including Sean Spicer) say there is nothing to see and the entity has been properly filed and secured.

New ‘Rosanne’ Will Take Place in a Solar, State-of-the-Art Trailer Home
‘Friends’ to Return on All Major Networks