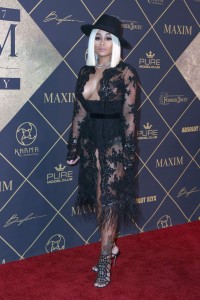 Kim Kardashian is furious at Blac Chyna and disappointed in her brother Rob over their feud.

Rob and Chyna’s feud started when he posted videos she sent him of her making out with another man in the bed they shared. Rob then posted a photo of Blac Chyna’s vagina, and she accused him of beating her.

Rob then went on a wild tangent, claiming she cheated on him with Tiny and T.I., and got plastic surgery after their daughter was born.

He also accused her of taking drugs and abusing alcohol.

Blac Chyna responded on Snapchat with a post that has since been deleted.

“Rob u did all this but u beat me up and try act it never happen !!! U put hand on me I swear on god !!!! ON my kids but I’m supposed to be quiet because you’re a Kardashian,” she wrote.

The Kardashians have thus far been hush, hush about the feud, but Kim is reportedly ashamed by the public feud, particularly about how it will affect their daughter Dream.

Rob tweeted at one point that Blac Chyna only had Dream to make him angry.

Hours after Rob put Blac Chyna on blast, her attorney told ABC News that they may take legal action.

“We are considering all legal options and recourses at this time,” said Blac Chyna’s attorney Walter Mosley.

Rob has been struggling to deal with the fame of the Kardashian family and the death of his father. He has battled with depression, weight gain and at one point did not leave his house for months.