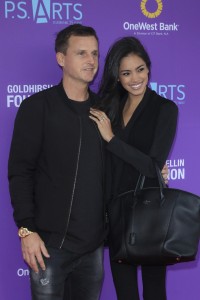 LOS ANGELES – NOV 15: Rob Dyrdek, Bryiana Noelle Flores at the Express Yourself 2015 presented by P.S. ARTS at the Barker Hanger on November 15, 2015 in Santa Monica, CA

Skateboarder and television star Rob Dyrdek made a big announcement on Monday, sharing the news that his wife Bryiana is expecting their second child. The two made the announcement via social media, with several videos and images to mark the occasion.

Their son, Kodah Dash, born just nine months ago, was also involved in the big reveal.

Dyrdek announced “It’s a girl” on social media via a video shown, with him popping a balloon and pink confetti spewing out. The couple wrote, “We decided to wait and let it be a surprise and as you can tell by our reaction we were very surprised! We are blessed and thankful. We can’t wait to welcome our little princess into our family.”

Bryiana also took to social media with a picture of her son and husband all wearing white outfits to celebrate the occasion. She captioned the picture with “And then there were 4!”

The star couple married in September 2015. Bryiana, a model, is said to have revealed that she was pregnant months ago, asking her husband to an at-home dinner date. The two kept it simple, ordering Chinese food and talking for hours outside. Bryiana said she convinced her husband that this was just a normal date night, but then gave her husband a gift.

The model gave Rob a photo of his son with a shirt that said “big brother!” on it along with a balloon with the words “welcome baby.”

He didn’t notice either of the hints until she handed him a positive pregnancy test. Bryiana states that Rob has been “praying for a little girl.” The model continued on social media, saying, “And yesterday we learned that prayer has been answered!”

The news comes after a difficult month, when Christopher “Big Black” Boykin died. Boykin, the former bodyguard of Dyrdek and best friend, starred in “Rob & Big” alongside his friend. Boykin died in May from a heart attack.