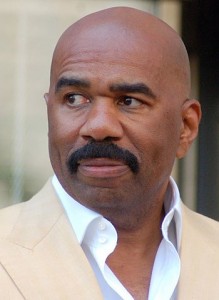 Steve Harvey at a ceremony to receive a star on the Hollywood Walk of Fame.

Despite hand held cards and purported teleprompters, sources say Steve Harvey is using no script as host of the latest “Celebrity Family Feud”. In a recent episode, Harvey’s family, including his mother-in-law began quarreling when he asked they’d trade in their man for.

Acting jealous and shocked, the comedian continued the show by playing to his guests’ feelings. The ABC show had previously avoided hurting people’s feelings, but insiders are suggesting that Steve Harvey acted so spontaneously he may not have realized what the reaction would be. Post-airing analysts Joe Warbler and Jen Hannigan suggested Harvey looked quite dazed in subsequent shots.

The next part of the show featured basketball stars Ralph Sampson and Kareem Abdul-Jabbar. A stagehand reported the card Harvey was holding had merely a doodle.

Scriptwriters were unable to answer inquiries regarding the purported missing scripts to the show. One was overheard saying that the “host might not need one – he’s so much funnier without it.”