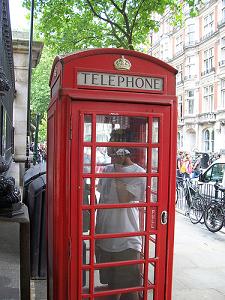 Phone pranks are childish, we all know it, but it doesn’t matter as they’re also very very funny. I don’t think it matters what age you are, when you watch or listen to one, you can’t help but laugh.

I don’t know if it’s the fact that you can’t see the person being pranked, so it’s almost like a victimless crime, or whether it’s just the fact you can get away with a lot more on the phone than you can face to face.

I personally love a good phone prank, not to do of course, no, just to watch and listen to, so here is a compilation of 5 of the best I’ve ever seen on YouTube.


The Simpsons is one of the most innovative television programmes ever, and THE best cartoon ever shown, although Family Guy runs it close.

The phone pranks that Bart plays on Moe when he rings his tavern have been one of those constants which have survived through the whole show. Here is a compilation of some of the best.


Fonejacker is a new show on in the UK, where one guy basically pranks his way around the country with a selection of different characters. The arab guy in this clip always says acronyms phonetically, so DVD for example becomes Doovde.

Like most of the best phone pranks it’s the simple ideas which end up being the funniest.


Steve Harvey is an American comedian who had a very funny radio show for 5 years. Some of the phone pranks he pulled over the years were very funny and this is probably the best.

The woman goes absolutely ape shit, reacting in a much funnier and more vicious way than I’m sure they ever imagined. The moment they reveal it’s a prank is quality!


I’ve loved Tom Green since the first time I saw him on MTV. His pranks are legendary and he seems to have no target he won’t go after, including his mum and dad.

This clip sees him calling Japan, and includes Harland Williams & Tony Hawk getting in on the act. It feels so wrong to be laughing at people who can’t understand English very well, but I couldn’t help laughing at this.


Soundboard phone prank calls can make for some of the funniest pranks ever, and this one using a stock of Jack Black’s phrases and utterings proves the point superbly

Jack Black’s voice makes me laugh at the best of the time, but this soundboard is filled with some of the funniest things he’s ever said and so works brilliantly.

I love the fact that this pranker keeps on phoning time after time. And even better is the fact that the employees get their own back by calling him names and swearing profusely at him.

They’re 5 of my favourite ever phone pranks, but if you think you can do better, feel free to try. The beauty of phone pranks is that anyone can do them, you do have a phone right?

Mr. Rogers Puts in the Wrong Tape (Vid) | Not a Lovely Day in the Neighborhood?
Terry Fator Video | Ventriloquist Puppet Duet Singing “What a Wonderful World”