Vice magazine, known for their reputation to address taboo subjects, has a video web site where viewers can find guerrilla-style news reports. It’s called VBS.tv and it recently got financed by the one and only Viacom.

Jeff Yapp, the executive VP for program enterprises for the MTV Networks said, “They gave me a pitch of ’60 Minutes’-meets-‘Jackass.'”

But even though VBS has deep pockets, they don’t show it. The majority of footage is only gathered by a single group of three people: a producer, a camera man and a host. No lights or makeup are even used.

As Bernardo Loyola, an editor at VBS states:

“Our aesthetic is raw. If it’s raggedy, if they’re hung over, it’s part of the shoot.” 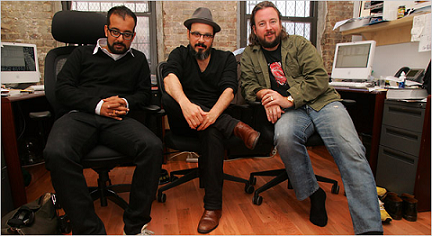 Vice magazine owners Suroosh, Eddy, and Shane (pictured above) have no intention of changing the rough style for the mainstream. News reports range from any topic like the latest independent band to sex-crazed raves in Europe. Each “documentary” is divided up in to short 5-9 minute webisodes.


This is the first part of a two part interview that VBS did with Sean Paul in his home town of Montego Bay, Jamaica. As you can tell the setting is quite different from most interviews on MTV; no fancy graphics or pop music in the background.