Don’t even try to pretend that you haven’t heard of Seinfeld. After all, it was the biggest sitcom of the 90’s and lasted nine long seasons. When it officially ended in 1998, it was the highest ranking show in the country, with a average viewership of 21,266,000. 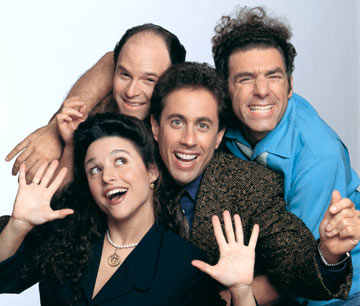 So why offer the episodes now after all these years? Rumor has it that Turner’s deal with Sony Pictures has caused the network to be more aggressive by driving traffic to their site and increasing ad revenue. Episodes are exclusive to the Windows OS and require a XMP Plugin for Firefox users.

So does this mean the greedy suits will never give the rights to Hulu? Yes, but that doesn’t mean you won’t get more content. Next year, expect to find “The Office” streaming as well as more FrankTV.

You won’t find the complete series, or even a complete season on TBS’s site, but you will find the last four episodes that aired on TV. Ironically, only 3 are from the same season and one is from a completely random season. Here are the titles and episode numbers:


These are the “top 10 Seinfeld moments” according to some random guy. This clip may bring back some memories for fans of the show (especially the last clip), and is still entertaining even for those that are interested in catching up with “the cool kids.”