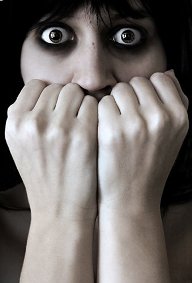 Phobias are the most common form of anxiety disorders. They are so prevalent that the chances are extremely high that you would know at least a couple of people with some kind of irrational fear.

Sadly, after watching people who are freaked out by an innocuous plate of pickles or peaches it becomes extremely difficult to take this disorder seriously. Some of the next few videos will probably make you scratch your head and question whether the reactions are real, or they’re faking.

Just listen to the hyperventilation and the screeching, and I’ll let you be the judge.


Fear of birds or “Ornithophobia” is not entirely uncommon. Just ask David Beckham. Fear of mustard, on the other hand…

Freaky Phobia Video – Girl Screeches at a Sachet of Ketchup


I feel sorry for this girl. Her “friends” used her phobia against her in a prank, videotaped it and put it up on youtube. I’m guessing you’ll never find this girl or the mustard phobic woman at a hot dog stand.


This is another clip from the Maury Show. I don’t know where he finds these people. This one would make sense if she was about 3 feet tall, toddled around in a diaper and needed a fresh bottle of milk every couple of hours. It’s mind-boggling seeing a grown woman lose her head over kids’ toys.


I’m glad I wasn’t around this girl. If her screeches were even slightly more high-pitched, even dogs wouldn’t be able to hear them. Still, it’s beyond me why she went swimming in a place where you’d find fish, considering how terrified she is.

“Coulrophobia” or fear of clowns. Again, it’s not uncommon. If you’ve ever read “It” by Stephen King, you may just develop this and I wouldn’t hold it against you in the least.