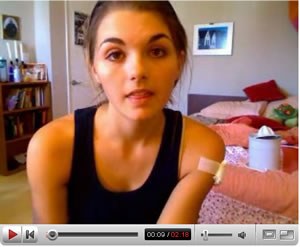 Lonelygirl15 has officially met her end. For those of you who have no idea who Lonelygirl15 is, here’s a brief description.

Lonelygirl15 is Bree, a teenager who kept an online video diary telling the world of her life, friends, and family in a blog style. Her videos could be found on YouTube, MySpace, and more.

Throughout the first year of Bree’s blogs, the world questioned whether or not she was a real person, telling everyone about her real problems. To set the record straight: Bree is a fictional character played by Jessica Lee Rose.

Bree’s journey started in the summer of 2006 and has just ended. People watched as she joined and then fled from a religious cult called the Order.

The season finale aired in twelve installments on August 3rd, ending with Bree’s death caused by the evil cult the Order.

The show’s second season will begin this week without Bree. After watching the twelfth part of the season finale, I’m excited to see what will happen in the second season.

I’m also curious as to how long the show will last without its title character, Lonelygirl15, Bree. Was the magic of the show Bree herself? Or the show itself? Only time will tell.


[Watch the latest episodes of Lonelygirl15]