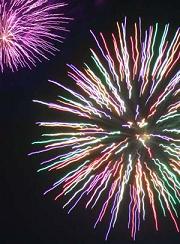 Another year is about to come to the end, and most of us will celebrate the end of 2007, and the start of 2008 by watching some fireworks explode, either live or on television.

All of the major cities in the world hold huge celebrations, and these 5 YouTube videos show some of the best.

This is a compilation showing some of the best new year’s fireworks displays of the last few years.


Australia has an important job to play in new year’s celebrations, being the first of the major world powers to see in the new year.

Consequentially, they always put on a good display, and the fireworks extravaganza they put on for the millennium in 2000 was one of their best ever.


This display in Hong Kong is awesome, and is to see in the Chinese new year, rather than the western one we are setting up to see in. The sheer amount of fireworks on display here is amazing.


This one, from Bucharest last year, doesn’t have the incredible quantity that Hong Kong did, but with a combination of fireworks, lasers and music, it still makes for quite a show.


Madeira in Portugal wouldn’t strike me as the sort of place to have the best fireworks displays, but this one, which stretches for a 5km span in the sky, turns that assumption on its head.


Last but not least, is last year’s display from London, and specifically the London Eye, and Big Ben. Being my home town, I’m proud that we are able to put on such a spectacular show.

The use of the London Eye, otherwise known as the Millenium Wheel, for many of the fireworks was a brilliant decision, because it focusses everyone’s attention to one place.

With the countdown to midnight set to start tomorrow, it’ll be interesting to see if any country or city can live up to, or even exceed these fireworks displays.