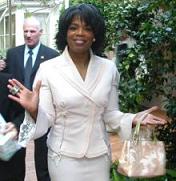 If Oprah Winfrey wasn’t already on television too much, she’s now invading our online video sites too, with YouTube announcing the launch of a special channel dedicated to her this week.

The channel comprises of various clips from the show, as well as a special ‘Oprah cam‘ which will give YouTube users access to special behind the scenes footage.

As part of the deal, Oprah will also act as a guest editor for YouTube with a special episode of her show dedicated to people made famous purely from their YouTube videos.

Tim Bennett, president of Harpo Productions, said in a statement:

“We are excited to be working with YouTube to provide another platform for people online to communicate with us and share in some of the one-of-a-kind experiences that occur behind-the-scenes at ‘The Oprah Winfrey Show’.”

It’s certainly quite a coup for YouTube to have a channel providing Oprah viewers (one of America’s most watched shows) with footage they wouldn’t normally get to see.

At the moment there isn’t much on the site, but that’s sure to change over the next few months as more videos get added to the archives.

Gaston on “America’s Most Smartest Model” | Did You Say Dirty Penis?
How Superman Should Have Ended Video Spoof | Batman & Superman Compare Notes