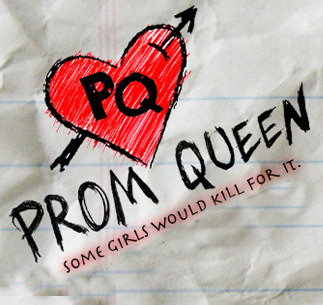 PromQueenTV is a new internet TV series that promises love, betrayal, sex, gossip and deception. The show, which is being produced by the new web TV start-up VuGuru, broadcast its very first episode yesterday. All the episodes will only be 90 seconds long but there will be 80 of them which are posted daily.

Senior year is a crazy time in anybody’s life – full of uncertainty – and Prom is supposed to be a night when dreams come true. But this year, at Edward Adams High School, there is a secret that threatens to unravel the institution forever.

Over the final two months of the year, high school sweethearts will fall apart, friends will be won and lost, hearts will be broken and mended; five girls will be nominated for Prom Queen, but only one of them will win. And on Prom Night, something terrible will happen."

I have just watched the first episode entitled The Long Walk where the slim, hot, brunette Danica, who is played by Laura Howard, wakes up in a bed (or as the show puts it a "strange place"). Cue the eerie music, a couple of red pills and a confused expression which turns to fear as Danica realizes a handheld video camera was recording. Just as the plot thickens the credits roll and you’ll have to wait for the next episode (due in a few hours).

Watch the first episode below:


All the cast have their own MySpace pages which can be found here.