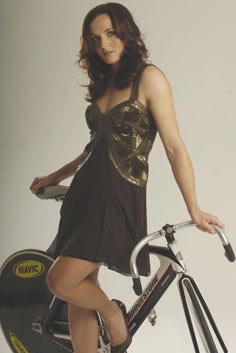 Victoria Pendleton grew up with cycling in her blood, her father having competed in cycling for 48 years. Along with her twin brother Alex, Victoria started competing at the age of nine.


Since then she has won four silver medals at British nationals. And though she nearly retired in 2004, only a year later she was a world sprint champion.

While her ninth place finish in Athens was devastating for her, she sported a black dress and dress shoes in 2007 for a sexy cycling photo shoot.

She was named the Sunday Times of London Sportswoman of the Year for 2007 and hopes to win a medal at this year’s Olympics.

Picture Credit: PicApp.com, GreenJersey
Check Out All of the 50 Most Beautiful Women of the Olympics
Continue Reading
You may also like...
Related Topics: