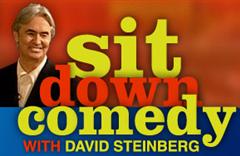 TV Land has decided to air its new series of Sit Down Comedy With David Steinberg on its website before it is aired on regular television. The show premiers online Monday, February 19, 2007.

TV Land is one cable TV channel that has really taken Internet Television by the balls by bringing a lot of its TV shows online, even if it does include the oldies from Marlo Thomas.

In the meantime while you wait for the show to premiere check out the rest of the videos and TV shows available on TV Land here.