Finally, there’s a stoner web series for all of you pot-lovers out there. But don’t worry, if you don’t “tap the bong” (as kids say these days) you’ll still have a few laughs with ‘Wilfred the Pot Smoking Dog.’

Wilfred, however, isn’t like most dogs. He speaks English and even stands upright. Then again, Wilfred is really just a man in a dog’s costume. But don’t get too comfortable around him. Wilfred is known to pounce on anyone he dislikes who dates his owner. 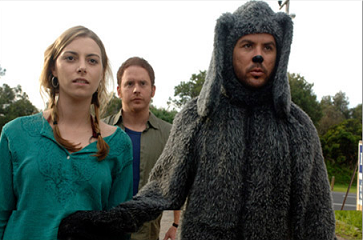 Of all places, this web series had it’s humble beginnings in Australia. Could Wilfred join the likes of GirlFriday and Forget The Rules to become a crossover hit? You decide every weekday at 4:20 PM.

Episode 1: Staying The Night Are Ya?


This is the very first webisode of Wilfred where Adam (the guy) visits Sara’s home after their date only to find her over-protective pot-smoking dog in the living room.