Lately, Crackle’s new web series line-up has been mimicking real TV. First, there was the Punk’d for racists and then that Chappelle’s Show rip-off. ‘Angel Of Death,’ on the other hand, proves to be more original.

The show revolves around a gun-slinging hell-bent female assassin. Hence the show’s catchphrase: “Meet the woman who can kick your ass.” Try finding that on cable! 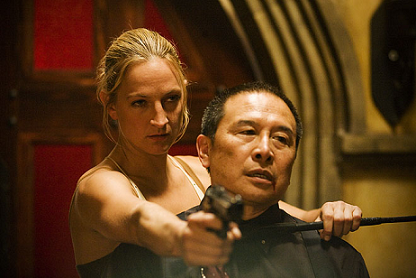 Eve, played by Zoe Bell (Death Proof), is a relentless assassin that carries out hits for the mob. While on the job, she suffers a life-changing head injury that causes her to turn on her mob bosses.

All the writing from the show was done by critically-acclaimed comic book writer Ed Brubaker; the man who was behind classics like Captain America and Daredevil. So don’t be surprised if most of the episode time is spent on gritty fight scenes.

Here we have the trailer for ‘Angel Of Death.’ One can only describe it as Kill Bill meets noir.