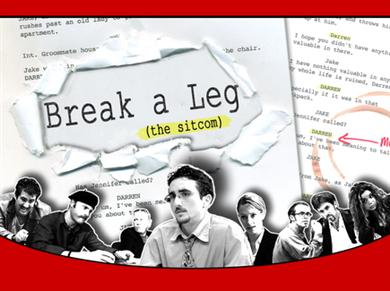 Break a Leg TV is a new online American sitcom that focuses on the life of David Penn, a writer who just got his first sitcom deal.

His show is called GroomMates and is about three ex-grooms living with their two ex-wives, but don’t go thinking that all BreakaLeg.tv is about is the trails and tribulations of a sitcom writer because you’ll be wrong.

David is going to die; he is going to die in the storage room at the end of the season tied up and with a gun to his head. From the beginning of the series you know this and David narrates you through to his tragic end.

BreakaLegTV mixes up business, relationships, fame, entertainment and death. It is described as a mix between The Office and Arrested Development with a healthy spoonful or murder thrown in.