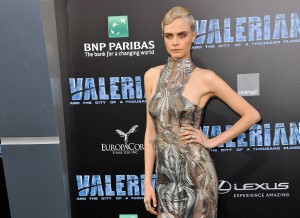 Cara Delevingne at the World premiere of ‘Valerian And The City Of A Thousand Planets’ held at the TCL Chinese Theatre in Hollywood, USA on July 17, 2017.

Cara Delevingne is the latest person to come out against Harvey Weinstein. The model / actress states that she had an encounter with the movie mogul, stating that he tried to kiss her. She also states that he wanted to watch her kiss other women and notes a specific incident in a hotel room.

Delevingne adds to the list of women that have come out against Weinstein in recent weeks.

A total of 13 women claim that he assaulted or sexually harassed them. Weinstein’s most serious acquisition comes from Asia Argento, actress and model, who claims that Weinstein raped her. Weinstein’s representative denies all of the claims. He has yet to be charged with any crime.

Angelina Jolie came out against Weinstein, too. She states that she had a bad experience with him over 20 years ago and decided to never work with him again. Gwyneth Paltrow also stated that he sexually harassed her.

Delevingne, openly bisexual, took to her Instagram account, stating “When I first started to work as an actress, i was working on a film and I received a call from‎ Harvey Weinstein asking if I had slept with any of the women I was seen out with in the media. It was a very odd and uncomfortable call.”

She continues to explain that she hurried off of the phone and never answered any of his questions. She states that Weinstein told her that if she was gay or with women publicly that she would never make it as an actress in Hollywood.

The encounter wasn’t the only time that the two spoke.

Delevingne  encountered him another time in a lobby, a year or two later, where he asked to chat with her. She states that he started to brag about all of the women that he slept with and invited her to his room.

“When I arrived I was relieved to find another woman in his room and thought immediately I was safe. He asked us to kiss and she began some sort of advances upon his direction. I swiftly got up and asked him if he knew that I could sing. And I began to sing….I thought it would make the situation better….more professional….like an audition….I was so nervous.”

She claims she had to leave and her stopped her and tried to kiss her before she got out of the room.

“I was so hesitant about speaking out….I didn’t want to hurt his family. I felt guilty as if I did something wrong. I was also terrified that this sort of thing had happened to so many women I know but no one had said anything because of fear,” she claims.