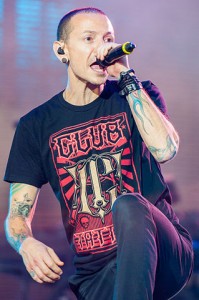 Chester Bennington, Linkin Park frontman, died of apparent suicide on Thursday morning at the age of 41, according to a report from The Associated Press.

“Shortly after 9 a.m. this morning, we were notified by law enforcement of a death in Palos Verdes Estates. We responded to the scene and unfortunately confirmed that Mr. Chester Bennington was deceased at the scene,” said Brian Elias, head of Los Angeles County Department of Medical Examiner.

Bennington released seven albums with Linkin Park. The band’s latest released “One More Light” was released in May and debuted at number one on Billboard’s album chart.

“Shocked and heartbroken, but it’s true. An official statement will come out as soon as we have one,” said fellow Linkin Park member Mike Shinoda.

Bennington responded to the suicide of singer and close friend Chris Cornell in a note shared on social media.

“I can’t imagine a world without you in it,” he wrote. “I pray you find peace in the next life.”

The former Linkin Park singer had previously been open about his struggles with alcohol and drug addiction, which played a role in the creation of many of the band’s biggest hits.

“I have been able to tap into all the negative things that can happen to me throughout my life by numbing myself to the pain, so to speak, and kind of being able to vent it through my music,” he said in a 2009 interview. “I don’t have a problem with people knowing that I had a drinking problem. That’s who I am, and I’m kind of lucky in a lot of ways ’cause I get to do something about it.”

Bennington had described his childhood as unhappy, with his parents divorcing at 11 and being molested by an older friend at the age of “7 or 8.”

Chester Bennington is survived by his wife and six children.