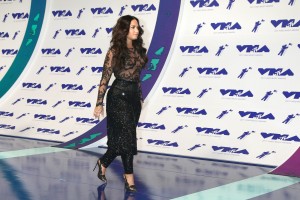 Singer Demi Lovato is in a new documentary called Simply Complicated. The documentary is available on YouTube Originals and spans 78 minutes in length. The documentary gives fans a look into the singer’s complicated life highlighting her battle with drugs at a young age.

The documentary, filmed over a seven-month period in 2017, talks about Lovato’s first experience with cocaine.

The singer remembers being bullied in school before a “popular kid” convinced her to use cocaine for the first time. Lovato, 17 at the time, was working on the Disney Channel and was already drinking alcohol and smoking pot when she tried cocaine.

She recalls her mom telling her that cocaine could cause her heart to stop.

Lovato states “I loved it. I felt out of control with the coke the first time that I did it.” She explains to fans that she comes from a family that is known for their addiction to substances. The Jonas Brothers tried to help her by staging an intervention.

Nick Jonas helped Demi and thought that he helped her get her life back to normal when she punched a backup dancer named Alex “Shorty” Welch on a plane ride. The incident was the result of Welch telling on Lovato after she threw a wild party at a hotel.

Lovato mentions her stints in rehab and that the first time, in 2010, didn’t work. She recalls going on a two-month bender using drugs daily. She states that she did interviews about her sobriety while being high and remembers promoting her “new life” while thinking she was such a hypocrite.

She states that she went through over 20 sober companions because she was always on drugs or craving drugs.

Lovato opens up about the time she spent in a psych ward, life with her ex Wilmer Valderrama, sexuality, her struggles with eating disorders and her sex life.