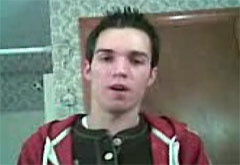 Ever felt lonely and wanted to talk to someone? Ever wondered if you posted your telephone number on YouTube if anyone would call?

Well 20 year old Ryan Fitzgerald did just that. He is unemployed and lives with his father and said in his video (below) that he wanted to "be there," for anyone who needed to talk.

Well I don’t think that Ryan will be disappointed with his response because now he’s the most popular man in town and within 24 hours he had received 5000 calls and text messages and blown the free minutes on his cell phone plan.

After receiving 1000s of calls Ryan clarifies he’s not Gay

I have to sympathize with Ryan here. He did something innovative and nice, if not a little crazy but gets lots of abuse and accusations for it.

I’m sure he’ll get used to it and ignore it eventually; they’ll always be some person somewhere on the net willing to throw a cocktail of abuse at someone. Just so he doesn’t feel alone I invite any of you to throw some insults my way. I can take it!

Come on show me what you got or make like a chicken and get the cluck out of here!