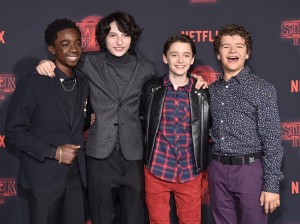 Stranger Things actor Finn Wolfhard was criticized by fans after he was videotaped heading into his hotel without stopping to take photos with fans or sign autographs. The video has since been deleted, but that hasn’t stopped fans from attacking the star.

Finn’s co-stars have come to his defense, as well as other young stars in Hollywood.

“Okay, no. No actor is under any obligation to stop for anyone,” said co-star Shannon Purser, who plays Barb on Stranger Things. “Finn is an incredibly kind human. But he’s human and he needs breaks, too.”

Purser continued on Twitter, explaining that while she hasn’t experienced the same level of attention as Finn, she has had fans waiting for her and has felt overwhelmed by it.

“And I’m an adult. I can’t imagine being inundated with all this attention at his age. It’s intimidating,” she wrote.

“We really love the fans. Finn is the nicest guy u will ever know. We all work so hard, and need a break sometimes. #Compassion,” Noah tweeted.

“Dam… seeing fully grown adults wait outside the ‘Stranger Things’ kids hotels etc, and then abuse them when they don’t stop for them…” she tweeted.

“Is super weird A. What adult in their right mind waits for a CHILD outside their hotel and B is then offended when the CHILD doesn’t stop,” she added.

Turner continued on her tweeting spree, adding that no matter what, the actors are children first. The Game of Thrones star called on fans to give Finn and other young actors their space “in order to grow without feeling like they owe anyone anything for living their childhood dreams.”

Wolfhard has yet to comment on the most recent incident, but fans have criticized him in the past for not stopping to sign autographs or take photos.