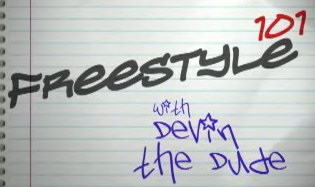 TheFeed, an online TV station from G4, is launching a new internet TV series called Freestyle 101. It’s a weird concept where rappers will rap about what viewers want them to. According to the site this includes "videogames, consoles, partying, MySpace, YouTube, love, life, da streets and so on"

This is all been done completely live with no preparation, nothing written down and no notes, its pure freestylin’. The show claims not just to entertain but to teach you the art of freestyling with interviews with professional freestylers. Check out the first episode below to get a taste.

This first episode brings you Devin the Dude who featured in Dr. Dre’s Chronic 2001.