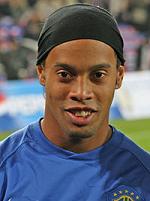 Goaltube.net (not to be confused with .org) is a site I found on Digg yesterday, which in the submission described itself as a “sports portal”.

Erm no, it’s not, it’s a site which takes content direct from YouTube, adds nothing to it, and tries to get traffic for nothing.

I clicked on the site because the idea of a sports portal built around YouTube videos is a good one, and appeals to me. But this isn’t that, and has more problems than I can even begin to describe.

When you get to the site, all that you see is a poorly conceived banner with Ronaldinho’s ugly mug attached to it, and one YouTube video in all it’s glory.

Down the left side are other goal videos, of which there are apparently 9290 for Ronaldinho alone at the time of writing. Click on one and the YouTube video maximises on the right. Great so far.

The problem is there’s nothing added to any of it. It’s basically just an aggregator of any videos featuring footballers on YouTube. What is the point?

Why would I go to this site and have to battle through thousands of clips I don’t want to find one I do? Maybe, I don’t know, I should just go to YouTube itself and search?

Goaltube does actually have a search function, but here’s the weird thing: I typed Beckham in to it, and instead of a glorious free kick from the L.A. Galaxy player, I got a sneak preview video of Victoria Beckham in Ugly Betty Episode 207. Not exactly what I was after.