Japan’s number one most-subscribed YouTube musician isn’t a rock or pop star. In fact, the man doesn’t even technically play a real instrument- only veggies and fruits!

I guess no one ever told Heita not to play with his food.

Two years ago when Heita uploaded a video of himself playing an onion flute, he had no idea that it would gain over 100,00 views. Since then, the man has possibly become the biggest sensation out of his hometown of Okayama, Japan. Last year he held live concerts and this year he’s been invited on Ellen. 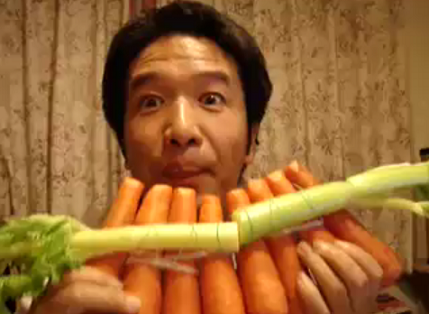 The 46 year old music teacher has used countless varieties of fruits and vegetables, but he usually carves them only to make flute-like instruments like the Ocarina. He sights his influences as John Lennon and Paul Simon.

Here is one of Heita’s most popular videos that shows him playing the song “Angels We Have Heard On High” with a broccoli Ocarina. His wife accompanies him in the background.