‘Just The Facts!’ is perhaps the most useful web series to keep an eye on during our current 2008 Presidential election. Whether it’s checking the facts in the latest McCain or Obama ad, or pointing out the lies in a Presidential Debate, they’ve got you covered.

“Seeing through the spin” has never been easier.

The series, which is brought to you by the same people behind FactCheck.org, prides itself on being nonpartisan and nonprofit. Behind the scenes, a staff of six people (most of whom are journalism majors) work frantically each week to point out the accuracies in TV ads, debates, speeches, interviews and news releases. 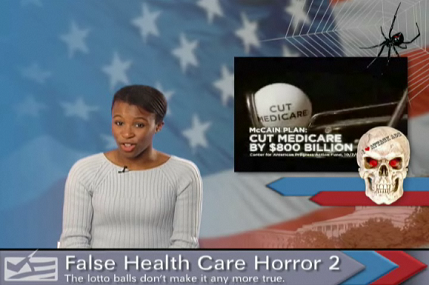 The result is twenty minutes of perhaps the most unbiased news available on the internet. While the entire Fact Check project was created in 1994 by the Annenberg Public Policy Center of the University of Pennsylvania, the show has only been around since early 2007.


In this latest webisode, Just The Facts! checks facts from the many competitive, and often ugly, campaign ads shown in the past week. One important issue discussed was Obama’s connection with ACORN.