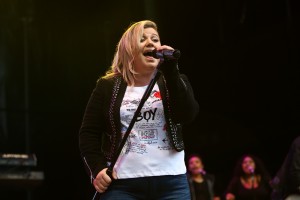 Kelly Clarkson, known in the past for her toned figure, opens up about the pressures of the music industry. In an interview with Attitude, Clarkson states that body image expectations led her down a dark path when she first broke into the music industry.

“When I was really skinny, I wanted to kill myself,” she states.

Clarkson, known for struggling with her weight issues, continued, “I was miserable, like inside and out, for four years of my life. But no one cared, because aesthetically you make sense.” Clarkson quickly rose to fame, going from a no-name musician to winning American Idol in 2002.

Clarkson was quickly thrust into the spotlight following the show. She went from an unknown singer to having platinum albums and several hits, including “Behind These Hazel Eyes.”

Signed to Clive Davis’ RCA Records, she recalls the start of her career as a “very dark time.” She claims that she damaged her feet and knees because she would spend so much time running and going to the gym.

The singer clashed with Davis publicly when her third album My December was being compiled. Davis called her song “Because of You,” “shi**y.” She told Variety that Davis didn’t like the song because it didn’t rhyme.

She claims that the group tried to bully her and told her “shut up and sing.”

Clarkson went on Twitter stating that she was never miserable because she had to be thin, but that it was her misery that led to her to being thin. She states that it wasn’t her weight that made her want to commit suicide, but her unhappiness.