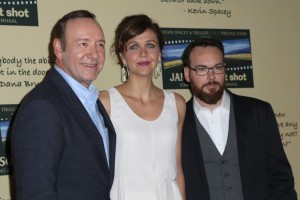 Actor Kevin Spacey continues to face career ruin on Wednesday following accusations from Anthony Rapp. Rapp claims that Spacey made sexual advances toward him over 30 years ago when he was just 14 years old.

Rapp told Buzzfeed that the misconduct occurred when he went up to Spacey’s bedroom during a party to watch television. He claims that after the party, Spacey stood in the doorway, picked up Rapp and laid on top of him.

Rapp claims that “he was trying to seduce me.”

Spacey didn’t deny the claim, but instead apologized for “what would have been deeply inappropriate drunken behavior.” He claims that he has no reciliation of the event. He then quickly followed by announcing to the public that he is gay.

He openly apologized for Rapp and claims that he has a lot of respect and admiration for him as an actor. “I am sorry for the feelings he describes having carried with him all these years,” states Spacey.

The accusations against Spacey have cost him his role in Netflix’s House of Cards series. Netflix quickly announced a halt to the show’s production following Rapp’s announcement. This Is Us, also made changes to their Halloween episode, editing out a reference the show made about Spacey.

The episode included a reference to a roommate that had been invited to a party with cast members in a Kevin Spacey movie. 20th Century Fox Television stated that, “In light of recent events, the producers have decided to remove the brief reference to Kevin Spacey.”

Spacey has also lost his 2017 International Emmy Founders Award. The award, announced in June, was to be given to Spacey by the International Academy of Television Arts & Sciences.

Several other allegations against Spacey have come out, too. Filmmaker Tony Montana states Spacey groped him in 2003. Actor Roberto Cavazos claims that Spacey would prey on young male actors.