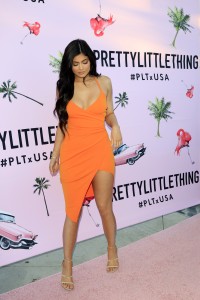 Reality TV star Kylie Jenner’s Snapchat was hacked on Sunday, and now the perp is threatening to release nude photos.

Kylie’s Snap stories now have messages from the hacker, which include “RT for her nudes,” “Follow for Kylie lipstick,” and “add for Kylie’s nudes.”

Kylie has been known to have some intimate videos and photos on her phone, something that  has come back to bite her on more than one occasion since she dumped Tyga. Sources say the couple was obsessed with filming themselves.

No intimate photos have been released of the reality star, and she hasn’t commented publicly on the matter. The threat to release nude photos may be an empty one.

An hour after the alleged hacker got a hold of her account, an update was posted that read: “jk she aint got nudes lol but rt my pinned tweet I want clout lol.”

This isn’t the first time Kylie has hacked. The 19-year-old makeup mogul’s Twitter account was hacked last June, and lewd tweets were posted to her account. Some of those comments were directed at Justin Bieber, Taylor Swift and Katy Perry.

The reality star didn’t appear to be phased by the Twitter hacking. Shortly after the incident, she posted a video on Snapchat.

“So my Twitter was hacked and I don’t really care. I’m just letting him have fun,” she said in the video.

Kylie is the latest target in a string of hackings that have exposed personal photos of famous celebrities. So far in 2017, hackers have targeted Kate Hudson, Jennifer Lawrence, Emma Watson and a host of other celebs. These hackings occurred after the celebs’ iCloud accounts were compromised. Photos were leaked that were taken on iPhones and backed up on Apple’s cloud service.

A previous hacker who released photos in 2016 was sentenced to 18 months in prison after pleading guilty to the crime.