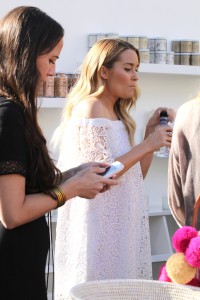 Lauren Conrad and husband William Tell welcomed a baby boy into the world on July 5. Weighing just 6lbs., 14 oz., the couple announced the birth of their son Liam on Instagram.

“He’s here! We’re so excited to welcome Liam James Tell into the world,” Lauren posted with a photo of a cross-stitch design featuring her family.

Lauren also announced her pregnancy on Instagram New Year’s Day with a photo of her sonogram and the caption: “Happy New Year! I have a feeling 2017 is going to be the best year yet…”

“We are thrilled to share that we welcomed our son Liam James Tell into our family,” the couple told PEOPLE in an exclusive statement. “Mom, dad and baby are doing well. We’re already in love!”

Lauren says she’s taking a break from the site for a few weeks to adjust to life as a new mom. She also asked her fans and followers for tips to help guide her on her motherhood journey.

“If you have any advice for me as a new mother, I’d love if you left it in the comments,” Lauren wrote.

In early June, Lauren told PEOPLE that she sees their lives changing.

“I think you don’t know until you’re there. I have very nice friends who are attempting to prepare me, but everybody does it differently,” she said.

Lauren said she had been hoping for a boy, and she will have plenty of help from mom, who told her “nobody loves you like a son does.”

“Both of our families live about 20 minutes from us, so I think we’ll have a lot of help, which is really great,” Lauren said. “William and I are so fortunate that we’re having the first grandchild on both sides.”

Lauren and William met when she was 16, but went on a blind date ten years later. The couple tied the knot in September 2014.