The latest web series to hit FunnyOrDie is perhaps the most original I’ve ever come across. Unlike most script-based web shows, “Letters From The Slammer” is written by a former inmate of a maximum security prison.

The co-creator of the show, on the other hand, hasn’t done any hard time. Though he claims that he “has seen the Shawshank Redemption” before.

When writer/producer Darryl Francis served more than 6 years at a maximum security prison in California, he found himself in solitary confinement with “nothing but scraps of paper and a pencil stub.” To cope with the time and entertain his fellow inmates he wrote fake letters to a variety of imaginary friends and family. 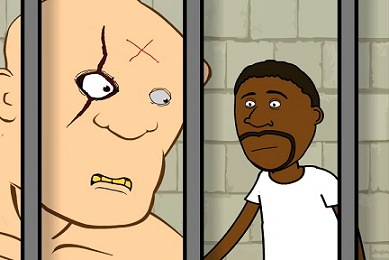 Co-director and writer Dean Ward, who has worked on TV shows such as “The Late Late Show,” The Chelsea Handler Show,” and “Penn & Teller Bullshit.” When he was introduced to Darryl’s work via his manager, web series history was made.

In this first episode, Darryl’s Momma shows that the bad boys in jail “ain’t shit” compared to her wrath of over protection. If this is an example of a typical episode, I’m sure we’re in for a treat.

We All Float On: HD Comedy Web Series | What’s Funnier Than A Fat Guy & A Midget?
LandlineTV: Web Sketches Mock Pop Culture | “Comically Relevant, For A Week Or So”