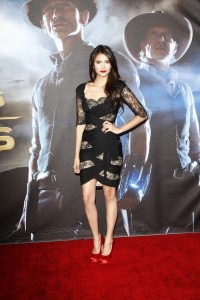 A source told E!News that the two stars were dating. They started out as friends, the source said, but their relationship became something more “a little while ago.”

The source said the two are just getting to know each other and seeing where things are headed. Nina just got out of a serious relationship, so she isn’t rushing into anything.

Nina last dated Austin Stowell, but the two called it quits in February 2016 after seven months of dating.

“Glen really likes Nina,” said another source. “She is completely his type of gal. They know and have met each other’s families. Glen is a very family oriented guy and Nina loves that about him.”

Sources say their friends love the two of them together, and that they seem to be pretty comfortable with each other.

Nina and Glen’s relationship may be public knowledge now, but the media and fans had suspected something was going on between them. They spent last year’s holiday season together, and those not-so-subtle social media posts gave their secret away.

Glen also attended Nina’s La La Land birthday bash, where the two of them recreated the famous pose from the film.

The couple also attended Julianne Hough and Brook Laich’s wedding together in Idaho. Their adorable and silly photo booth photos made it onto Twitter over the weekend.

An insider told Hollywood Life that Nina felt an “immediate physical attraction and spark.” With ex Ian Somerhalder, the source said, their relationship grew out of a friendship. Things between Nina and Ian were slow and cool.

Th source told Hollywood Life that the two have “crazy strong chemistry” and that they’re “all about adventure and fun.”