Gossip Girl creator Josh Schwartz is back with yet another web series for TheWB. This time, however, the show doesn’t focus so much on character development as it does the slew of indie bands that are highlighted each episode.

Heck, if it weren’t for the flirtatious banter, each webisode would just be a musical performance. 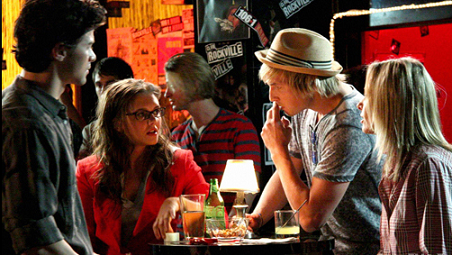 That being said, the cast of Rockville CA isn’t composed of a bunch of nobodies. Andrew J. West (Hunter) has been on shows like Greek and Privileged, Alexandra Chando (Deb) was featured on the soap As The World Turns, and Bonnie Burroughs (Shawn) has made numerous appearances on Boston Legal and The Closer.

No doubt, the primary focus of the show is to feature 20 up-and-coming bands. Each have been chosen by music supervisor Alexandra Patsavas who has chosen music for The O.C., Greys Anatomy, and many others. Band highlights include:

This is the second webisode in which The Kooks perform. You can catch new episodes of ‘Rockville CA’ every Tuesday on MySpaceTV as well as live performances.