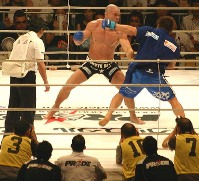 An alternative to the Ultimate Fighting Championship (UFC) could be officially heading to the internet sometime next year. The Jungle Fight Championship and Mixed Martial Arts World League (MMAWL) will be working on a project with WaveLit TV, an internet broadcasting company.

Currently the plan is to is to broadcast 4 events per year and to showcase live streaming from the Mixed Martial Arts World League gym/training facilities. There will be a mixture of live and on demand video. I would personally be expecting more than just 4 MMAWL events, but at least it’s something.