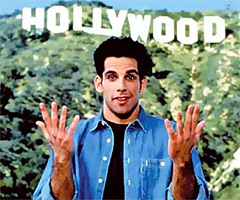 The show starred Janeane Garafalo, Andy Dick, and Bob Odenkirk and was often praised for it’s SNL-like parodies. Unfortunately it was canceled after only one season. But now, every episode is available for free viewing online.

As a 90’s kid, I remember this show being aired on FOX and laughing quite a lot. After re-watching a few of the episodes, I found myself only mildly amused. If you can’t remember the 90’s then I suggest you not watch this show. Here are a few of the pop culture parodies:

Another thing you may notice is that one of the executive producers is Judd Apatow (of Superbad and Knocked Up fame). This is because he and Ben were roommates in college.


This is the very first episode where Ben explains that you might not know who he is, but he’ll try his best to make the show funny. The majority of this episode parodies Bono from U2.