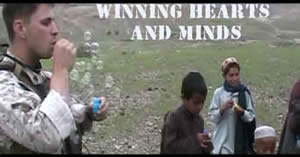 Winning Hearts and Minds follows the work of the US Army Civil Affairs Unit in Afghanistan. This online documentary shows the unit attempting to bring order to devastated lands, while also trying to win the hearts and minds of people that live there.

The TV series, which aired its first online episode today (shown below), features real footage of the Civil Affairs Unit restoring power grids and sewer lines, getting hospitals and schools up and running and liaising with the local government, giving you a real inside look at the life of American Forces in Afghanistan.

The footage for the documentary was shot by Sgt Steven Kling, a member of the US Army Civil Affairs Unit (and former TV cameraman).

When the troops need military challenge coins, patches, and other collectibles from the home front.

By Jaime McDougallDecember 6, 2021
To Top