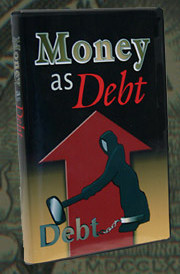 In many nations debt is becoming a serious problem, with a huge proportion of people living in a world of loans and credit cards, building up unmanageable debts.

Many people, including myself, find the level of debt to be at an almost unbelievable level. It is hard to see how an economy can survive when the majority of money spent, is actually owed to someone else, so much so that most money is actually debt.

To get your head around this you should watch Paul Grignon’s animated financial documentary called "Money as Debt". Paul intends to describe to you that if there was no debt, there would be no money. He specifically looks at the present unsustainable monetary system in the US and Canada.

This is a painless, but hard hitting and entertaining educational film. You can watch the whole documentary below which I found on Google video.