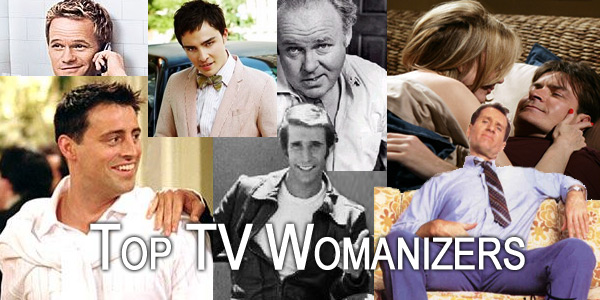 The confident womanizer has become a common favorite character in many TV shows, especially in the comedy circuit. Despite treating women like sex objects and generally being degrading, these characters have become the antiheroes of comedy pulling laughs out of unprotected sex, broken hearts, clinically depressed women, threesomes and broken homes. Here’s the top 10…

Hands down, the number one TV womanizer of all time has to be none other than The Fonz from Happy Days. The proof of all of Fonzie’s powers can be seen in this clip where he single-handedly saves the day and gets the babe in just a couple minutes.

Apparently the key to getting all the girls is being a gang-related, leather jacket-wearing, high school drop-out. Surprisingly, actor Henry Winkler was nothing like the stud he played on camera. According to him, “The Fonz was everybody I wasn’t. He was everybody I wanted to be.”

2) Charlie Harper (Two and a Half Men)

Of all the womanizers on our list, none are as undeservingly irresistible as Charlie Harper. All types of women, even those that he’s offended in the past, are eventually captivated by his charm- almost as if by magic.

Harper may be a magnet for short relationships and booty calls in Two and a Half Men, but actor Charlie Sheen’s womanizing doesn’t end when the camera’s stop rolling. When asked about the most number of women he had had sex with, Sheen replied, “…five girls at once…all six people in that room came out of it pretty satisfied.”

Watch Two & a Half Men Online

It’s no secret that Al Bundy from Married With Children gets away with a lot of misogynistic comments and trash talking towards women- especially fat ones. Here we have a compilation of the many insults he’s gotten away with.

Another reason Al Bundy is placed high on our list is for founding his misogynistic club “National Organization of Men Against Amazonian Masterhood” (or NO MA’AM for short). As seen in this clip, somehow bashing the opposite sex doesn’t interfere with supermodel-type women obeying his every command. Bundy, you dog.

As bi-polar Mob boss Sonny Corinthos is, he sure knows how to get chicks. Since his character was written in in 1993, he’s had 3 wives and 11 ex-lovers- 4 of which have died due to his dangerous lifestyle. You’d have to be crazy to put up with Sonny.

Fortunately for him, most women he runs into turn out to be. Take, for example, this scene with his ex-fiancee’s cousin Olivia Falconeri; their heated argument turns into a make-out session. Actor Maurice Benard, who really is bi-polar in real life, stated the following an interview with Oprah:

“When I let it be known I was bipolar, [the writers] wrote it into the character.”

In an interview with USA Today Julian McMahon commented on his character boasting, “Without a doubt I’ve had the most sex scenes in any television show, ever.” He’s even had a sex scene with Rosie O’ Donnell; a clip you’ll just have to look up on your own time.

6) Barney Stinson (How I Met Your Mother)

Creator and screenwriter Craig Thomas describes Barney as “a pretty fragile character who’s really afraid of being alone.” Though, you wouldn’t know it from most of his sexist scenes on How I Met Your Mother. Neil Patrick Harris couldn’t be more of a jerk to the women that come to his apartment.

Neil, who is actually gay in real life, has had over 200 one-night stands in the course of the show, yet remains as one of the most likable characters. His code of manhood dubbed “The Bro Code” includes rules like the following:

“XVII. When out with the guys, never accept a call from your girlfriend—unless she’s dying or trapped under a burning fuel truck, and if that’s the case, make it quick.”

Watch How I Met Your Mother Online

7) Archie Bunker (All In The Family)

All In The Family aired just years after the Women’s Liberation movement took place in the late 1960’s and reflected the times by having TV’s “most lovable bigot” Archie Bunker as one of the main characters. In this classic scene Archie is shocked by the idea of equal pay.

You wouldn’t know it from watching a single episode, but Carroll O’Connor (who played Archie) was in fact a liberal and an English teacher. Concerning the character he played, he commented in an interview:

“I never heard Archie’s kind of talk in my own family. My father was a lawyer… in partnership with two Jews… There were black families in our circle of friends. My father disliked talk like Archie’s – he called it lowbrow.”

8) The Entire Cast Of Mad Men

Just one character out of this show wouldn’t be enough of an example to show how obviously sexist Mad Men is. Stories and history lessons about inequality in the workplace can’t compare to seeing it on screen. Nearly every male character, no matter how big or small, is a womanizer in each episode.

The ’60s was certainly a strange time to be in the medical field. Birth control pills were taboo for unmarried women and it wasn’t uncommon for a doctor to smoke. When Peggy visits the gynecologist for her first (and last) time during the show, the help that she gets might as well be sexual harassment.

All throughout the first season, Pete certainly has a shitty way of showing Peggy how he likes her. Here’s the classic moment when they first met- who knew they’d be hooking up later that night?

Joey is perhaps the most likable skirt chaser on TV due to his dimwitted charm and humor. Sure he’s a womanizer, but he’s too dumb to know it. In this compilation of his famous catchphrase “How You Doin’?” it’s easy to see that Joey’s libido has no off button.

In real life Friends actor Mat LeBlanc certainly has a way with women as well. According to a NBC interview about he revealed that he once seduced two stewardesses and convinced them to take him in as a roommate when he first moved to New York City.

Chuck Bass is the ultimate parent-less wild child. After both of his parents died leaving him in charge of a billion-dollar company he devotes most of his time to being a jerk, throwing lavish parties, and hitting on girls- all usually at the same time.

If the secret to getting babes is throwing insults at girls, then then Chuck Bass is probably the most attractive guy in Gossip Girl. Sure, he can be a giant jerk most times, but he eventually grows a heart large enough to profess his love for his girlfriend Blair. For this reason Chuck is at the bottom of our list.