The new controversial TVUPlayer has appeared on the internet and could be the TV studio’s biggest enemy since Napster. This new player allows you to potentially watch any television channel in the world on your PC.

This already impressive lineup of channels is available from any internet enabled PC in the world and could potentially expand to include many more channels.

It is my understanding the system works where one person records live TV and streams it to the internet. This stream is then redistributed by other people who are watching the channel.

I tried it out:

I tried out a few of the channels myself and here is a screenshot. The software looks pretty simple and is just as simple to use. Double click on a channel in the list and it starts to play. 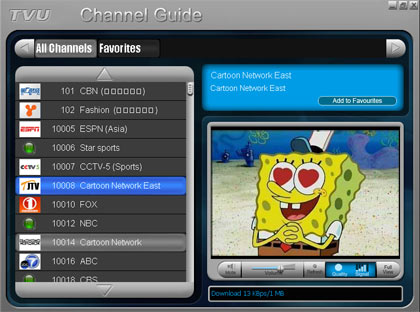 Channels like CBS, Hollywood Movies, and Fox had satisfactory quality and played well in full screen. All channels however took a little time to get started; you could find yourself waiting a minute or two for the channel to start playing.

When the channels finally started it would be a bit jittery, but this would eventually settle. I was disappointed to find that the Comedy Central channel was actually quite low quality and you couldn’t really watch it in full screen.

Overall though I’m very impressed at the channels available and their quality. If you can’t get some of these channels where you currently live then this software is great for some extra TV (we always need more!).

Another great feature is that an online program guide can be viewed here for all the TVUPlayer channels.

TVUPlayer has a nice lineup of sports channels too and you can even watch some western sports events on Chinese TV stations for free. These could be events that you may otherwise have to pay for.

Unfortunately since the TV stations have about a 2 minute delay from the live viewing you couldn’t listen to an english speaking radio station for commentary on a sporting event being aired on a foreign sports channel.

Because all the channels on TVUPlayer are broadcast by individuals who already have access to the TV station, there is always a chance that a channel can just disapear out of nowhere when that person decides to stop broadcasting to the internet.

But afterall it is free so you can’t really complain, that doesn’t mean it won’t be frustrating.

Many people will think that the channel owners or copyright owners won’t sue because the original adverts are broadcasted too. Although this will undoubtedly work in TVUPlayer’s favor it may be overuled by the fact that the licenses to show the TV shows are often region specific.

This becomes even more of a problem with sporting events. The licenses for sporting events are very strict, and if content owners think they may lose out on revenue if events can be viewed from another region for free on TVUPlayer, they will take legal action.

However, TVUPlayer does seem to have the get out that it doesn’t distribute the channels itself, it just provides the technology. How people use this technology is up to them.

This is the same get out that has been kept file sharing programs like azureus and emule alive, and it could well do the same for TVUPlayer and the clones that follow.

Watch All Quiet on the Western Front (2022) Movie Review Video