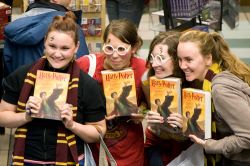 July has been a quite a month for Harry Potter fans. With the film release of The Order of the Phoenix, and the book launch of The Deathly Hallows, it seems like everyone is barmy for the boy wizard. I haven’t seen such ardent devotion since Star Wars!

Harry Potter fans will queue for days to get their hands on the books, dress up as their heroes, and sing about the boy wizard. Some of them even believe they are Harry!

These videos take a closer look at the Harry Potter phenomenon, and some of his craziest fans.


Harry Potter fans don’t get much loopier than 18-year-old Greg Pinkleton, a delusional teen who believes he is the boy wizard. His embarrassed family and concerned girlfriend arrange an intervention, but this fantasy fanatic won’t give up his obsession without a fight.

Of course this is a spoof, made to exaggerate the truth. Harry Potter fans aren’t really that crazy, are they?


Five Harry Potter geeks seem like unlikely rap stars, but these guys give Snoop Dogg a run for his money. It’s difficult to look hardcore wearing the Hogwarts’ uniform, but the team from Moist Cupcake does it with style.

This video is hilarious, with very clever lyrics and inspired dance moves.

There’s something about that bespectacled sorcerer that seems to inspire his fans to sing. Hank Green has taken the folky route with his ode to Harry Potter yearning, “Accio Deathly Hallows.”

The greatest problem with this song is that it’s just so catchy. Hear it once and you’ll be singing it for days.


It makes sense to find Harry Potter fan videos online. After all, fantasy enthusiasts spend most of their time at their computers, right?

However, with the release of The Deathly Hallows, these strange creatures were more likely to be found at their local bookstores.

In this video, Jackie and Dunlap take a closer look at the Harry hype by getting amongst the fans. These rednecks pose some hysterical questions to the costumed customers.


Of course, not everyone is as good-natured as Jackie and Dunlap. The book spoilers posted online made it very easy for your common creep to rain on the parade of Harry Potter revelers.

This video looks at one such creep, who pays a surprise visit to a local bookstore. His first victim is a fan dressed as Hedwig the Owl. I suspect her lower lip was quivering under her beak as this jerk taunted her with the book’s ending.

Not content with this, he then drives down the street, recounting the spoilers through a megaphone. Many fans hurl abuse or cover their ears. But my favorite is the caped Harry freak, his eyes wild with fury as he tries to chase the car down.


As Harry Potter aficionados around the world mourn the end of the popular series, I can’t help but wonder if it’s all for the best. After all, would these faithful followers adore a middle-aged wizard?

This video shows what the future might hold for Harry Potter. Perhaps we should all be glad he’s bowed out of the fame game gracefully.

Will you go see the new Harry Potter & the order of Phoenix Movie? Click to Vote Now. U.S. Only