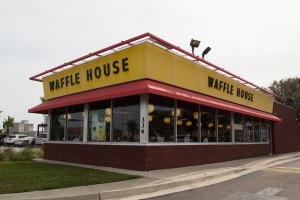 JACKSONVILLE, FL – OCTOBER 25, 2016: A Waffle House in Jacksonville. Waffle House Inc. is a restaurant chain with over 1700 locations found in 25 states in the United States.

Actor Donnie Wahlberg surprised waiters at a Waffle House in Charlotte on Wednesday, leaving the staff with a shocking $2,000 tip on a mere $82 meal. The kind gesture was fully documented on his Facebook Live video on Wednesday before the video picked up over 220,000 views in the first seven hours.

The “Blue Bloods” star was in town ahead of his News Kids on the Block concert, which took place last night at the Spectrum Center.

The star took a photo of himself with staff members as well as the receipt. The bill, high for a single person at Waffle House, included the meals of several of Wahlberg’s friends that ate with the star that night. The $2,000 tip was split among all of the waitresses that were working that night, according to reports from the Charlotte Observer.

Wahlberg’s gesture was explained by the star, who stated, “My mom waited tables, and my dad tended bars – for years!.” He continued, “So, when I walk into a #WaffleHouse, and the staff treats me like a king, you better believe I treat them like queens! Thanks to the team at @wafflehouseofficial Charlotte, NC!”

The actor spent even more time in Queen City in recent days, giving fans backstage passes to his concert.

Wahlberg’s video wasn’t all about his generosity. The actor and singer spoke to his fans via Facebook Live, talking about the food, discussing his youth and giving fans a glimpse into his life with stories of tour pranks.

Wahlberg also took a slight jab at his brother, stating that he was always “the good son.” He said that he was never out “robbing things, going to jail.” The reference may be to his equally famous brother, Mark Wahlberg, who was known to be in trouble with the police when he was 15 following a series of arrests and bad choices.