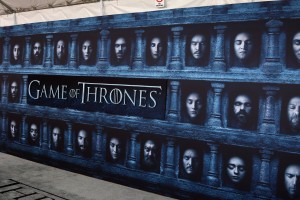 Game of Thrones, Season 7 premiere was filled with a lot of shock and awe for fans. The episode opened with a huge shock, but it got even more interesting when Arya Stark was riding through the woods on her way to King’s Landing.

Stark, who watched both her mother and father die, is seeking revenge when she comes across a band of knights in the forest singing a song. The singer? Ed Sheeran. He played an unnamed soldier who was singing as Arya approached.

The singer didn’t have much of a dialogue in the episode, but fans couldn’t help but to talk to social media to note the singer’s appearance in the hit show.

Dana Schwartz tweets: “nothing takes me out of a fantasy world like a random Ed Sheeran appearance #gameofthrones.”

Some fans were more forgiving and liked the musician’s appearance, stating, “I think @edsheeran lowkey just dropped a new single in #GoT lol.”

Sheeran joins a group of other musicians that have made appearances on Game of Thrones throughout the series, including Snow Patrol and Coldplay members.

Sheeran hasn’t commented on the backlash he received by fans, but did post behind the scenes photos on Instagram. A recent upload from the singer also mentions Ed Sheeran will appear on an episode of The Simpsons, where he will be the voice on a musician on an episode of the show.

One fan of the singer, dr.quill, commented  on Instagram: “Ed Sheeran has left the physical realm and is now touring TV shows and cartoon Universes, GOT, Simpsons what next? Infinity wars? @m_priest01.”

Fans knew that Sheeran would have a cameo in the show since spring. Maisie Williams, who plays Arya Stark in the show, is said to be a huge fan of Sheeran and a main reason that the musician made his appearance on the show.

Aaron Carter Slams Brother Nick Carter for Public Tweet after DUI Arrest
No, Taylor Swift Was Not Carried Out of Her Apartment in a Suitcase