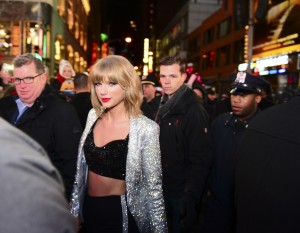 Don’t believe the rumors – Taylor Swift was not carried out of her New York apartment in a giant suitcase.

The crazy rumor spread after Splash News posted a photo on Monday that showed a giant black box being carried into a waiting SUV outside Taylor Swift’s apartment.

The caption for the photo, pointed out by Spin1038, read:

The grammar and spelling errors in the caption are strange, which lead to a lot of people speculating that maybe there was just a misunderstanding.

Plus, there was nothing really going on in the photo that would lead you to believe she was being carried inside the box.

Later that day, a representative at Splash cleared the air, confirming that Swift was not in that big black box.

“The report stated it as fact, which we actually don’t know. How could we?” said the representative. The rep pointed out that the photographer “was not really a regular.”

Splash News eventually changed the photo’s caption to: “Taylor Swift’s security guards are seen moving a huge case into the trunk of an awaiting SUV.”

Swift is allegedly hard at work in the studio in Nashville, which would explain her absence for the paps.

E!News reported back in May, “She has been working on it around the clock and will be making an announcement soon. She is really excited about her new music and can’t wait to share it with her fans.”

An insider told E!News that Swift is “entirely focused on that and not much else.”

“She has been 100 percent dedicated to making music the last few months and that’s it,” the insider said.

Ed Sheeran’s Appearance on Game of Thrones Receives Mixed Responses
Caitlyn Jenner on Running for Office: “I Have Considered It”