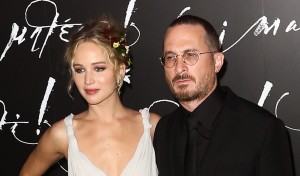 Speaking at Elle’s Women in Hollywood event, actress Jennifer Lawrence opened up about being objectified early on in her career. Other females in Hollywood delivered speeches about the hurdles they faced in their journey to the big screen, but Lawrence’s speech was the most memorable and timely.

Lawrence recalled being asked to lose 15 pounds in two weeks when she first started out in Hollywood. The producer for that film asked her to do a nude lineup for the part, and use the naked photo as inspiration to lose weight.

The actress, who was an honoree at the L.A. event, said the experience made her feel “trapped.”

“When I was much younger and starting out, I was told by producer of a film to lose 15 pounds in two weeks,” she said. “During this time a female producer had me do a nude line-up with about five women who were much, much thinner than me. We stood side-by-side with only tape on covering our privates.”

That’s when the female producer said she should use the naked photos of herself as inspiration for her diet.

“I’m still learning that I don’t have to smile when a man makes me uncomfortable,” she added. “Every human being should have the power to be treated with respect because they’re human.”

In a statement to People, Lawrence also addressed the allegations against Harvey Weinstein. The actress recalled working with Weinstein, but said she never experienced any form of harassment.

“My heart goes out to all of the women affected by these gross actions,” she said. “And I want to thank them for their bravery to come forward.”

Dozens of women have come forward to accuse Weinstein of sexual harassment, including Ashley Judd, Cara Delevigne and Angelina Jolie, in a New York Times report. Weinstein allegedly came to a settlement with eight women, including Rose McGowan.